Most areas of the country

Farming Advisories
IN AREAS AFFECTED BY THROUGH OF TY ‘MINDULLE”
Be alert and extra careful to those living in low lying areas and near mountain slopes due to possible flooding and landslides; During the rainy season, farmers are advised/ reminded to do cover cropping, land terracing and waterway declogging activities. This is to prevent soil erosion and provide humus, regulate water, reduce weed, increase biodiversity and improve farming as a whole. Continuous wet weather promotes fungal development and can cause damage to stored farm products, reduce the quality, viability and market price of the grains. Thus, it is advised to keep barns and crop storage rooms to be in good, dry and well -ventilated condition. Clean creeks, canals and ditches; store harvested crops in elevated, well ventilated and covered places. Water impounding is advisable during heavy rains for future use.

FOR WET (IRRIGATED) AND MOIST AREAS
Livestock/domesticated animals are susceptible to contract diseases during the rainy period, always keep animal shelters and its surroundings clean, dry and well ventilated. A clean environment can minimize the possibility of covid-19 infection. Land and seedbed preparation; planting and transplanting; removal of weeds and cultivation, harvesting of matured crops, use covered vans in delivery of goods in the market; planting of fruit trees to replace the old ones.

Slight to moderate seas will be experienced over the whole archipelago. Be reminded to be very careful in going out fishing specially those using small sea craft. Always bring emergency kit. Be updated for the latest weather update and farm advisories.

All types of shellfish and Acetes sp. or alamang gathered from the areas of Coastal waters of Dauis and Tagbilaran City in Bohol, Dumanquilas Bay in Zamboanga del Sur and Lianga Bay in Surigao del Sur are NOT SAFE for human consumption. Fish, squids, shrimps and crabs are safe for human consumption provided that they are fresh and washed thoroughly, and internal organs such as gills and intestines are removed before cooking.

Slight to moderate seas will prevail over the whole archipelago throughout the forecast period.

Transition from ENSO-neutral conditions to La Niña is favored in the coming months with 70-80% chance of La Niña forming in the last quarter of 2021 which may persist until the first quarter of 2022.
Farm Advisories
Expanding rubber farmers’ opportunities thru adoption of modern techs and new initiatives *
The National Banner Program Committee on High Value Crops-Rubber (NBPC on HVC-Rubber) led by Chairperson Alfonso Jack Sandique recently approved a motion for the Philippine Rubber Research Institute (PRRI) to revisit and facilitate the adoption of modern rubber production technologies among farmers, starting from seed selection to tapping.

PRRI Acting Executive Director Dennis Palabrica explained that a previous PCAF resolution was already adopted to study the efficient operation of the Platinum Rubber Development Incorporated (PRDI). In fact, pilot testing and related research were already being conducted. PRRI also noted that funding should be secured to revisit and facilitate the adoption since it would require additional manpower and quality materials.

Dir. Sandique confirmed that it is possible to introduce intercropping to small holders since they are the priority stakeholders and gave an example of a three-hectare farmland being divided to plant rubber, abaca, and cacao. This was supported by Dr. Agustin Mercado, Jr. of the World Agroforestry Centre, sharing their application of rubber and cacao intercropping on the sloping hills of Claveria, Misamis Oriental.

Department of Trade and Industry IX (DTI 9) Regional Director Sitti Amina Jain emphasized that all activities of PRRI from 2021 onwards should be well-documented in the roadmap.

Once approved, the roadmap should be communicated and disseminated to all regions and DA agencies for alignment and implementation. Sandique also announced the strengthening of the Committee’s organizational structure by reviving the Rubber Cluster Group, previously arranged by DTI. 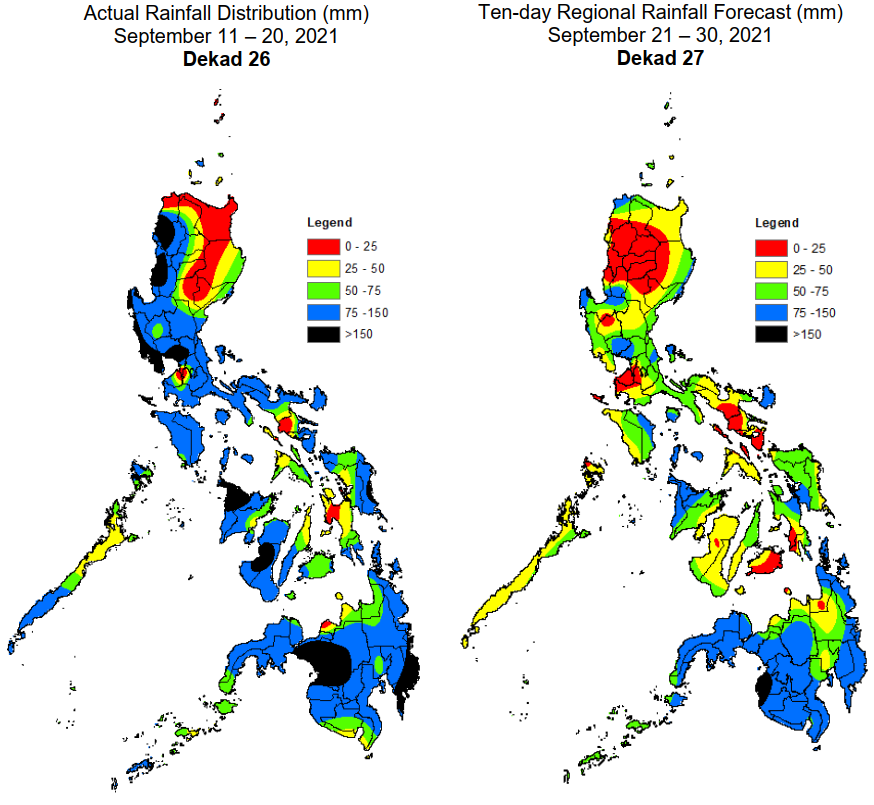 Wet – most of the region; Moist –Aparri Harvesting of matured rice, corn, eggplant, onion tomato, sweet potato, ginger, banana, string bean, upo, avocado, patola, and cassava are being performed. Repairing of levees destroyed by the strong winds, heavy rains and floods caused by Typhoon Kiko is being performed. Early planted rice and corn are in harvesting stage. Some corn are on silking and tasseling stages while late planted rice are in head development stage. Harvesting of potato, cucumber, raddish, wombok cabbage, sweet pepper, radish, and carrot is ongoing. Removal of debris and repair on canals or ditches caused by southwest monsoon rains are being done. Upland rice and late planted corn are in vegetative and flowering stages. Delivery of fresh harvest is ongoing. Wet – most of the region; Moist - Camarines Sur Harvesting of matured rice and other high value crops such as cassava, banana, lettuce, papaya, avocado, pechay, tomato, string bean, eggplant, and patola is underway. Irrigated and rainfed rice and corn are in different stages. Delivery of goods in the market is ongoing. Harvesting of rice, corn, patola, banana, papaya, sweet corn, string bean, pineapple, guyabano, avocado, mango, and cabbage is ongoing. Lowland rice are in different stages while some upland rice and corn are in harvesting stage. Cleaning of fields and repairing of levees and dikes destroyed by the past storm continue. Sundrying of newly harvested rice and corn is taking place.