The Climate Impact Assessment for Philippine Agriculture is publicly issued by DOST-PAGASA every month. It contains weather and climate information relevant to farm activities for rice and corn in all regions of the country. DOST-PAGASA aims that this report would serve as a useful reference for agriculturists, policymakers, farmers, and their advisers (e.g., agricultural extension workers and agricultural technicians) to assess the potential adverse impacts of an impending extreme event (e.g., drought, heavy rainfall, and tropical cyclone occurrence) to existing crops and to subsequently formulate effective adaptation response.

Jose (1982) conceptualized the Report in consideration of the state-of-the-art methods for agricultural assessment and farm advisory-formulation during the 1980s. The report has been regularly issued since January 1985 and was originally designed to derive information from in-situ observation, specifically, data collected from meteorological stations of DOST-PAGASA. In 2021, the Report underwent considerable enhancement in an attempt to start aligning its content with that of contemporary global and regional scale agricultural monitoring systems (Fritz et al., 2019).

Starting from the 1st Issue of the 38th volume of the Report (i.e., Assessment for January 2022), the information provided has been entirely derived from satellite-derived products. The main reason behind shifting from surface observations to satellite-derived products is the spatial scarcity of the former while the spatial and temporal completeness of the latter, making the Report more relevant and representative to the real conditions of rice and corn farms in the Philippines. In addition, the auxiliary farm data (i.e., crop cycle, crop location, soil characteristics) used in formulating the Report were also updated based on latest research and recognized scientific facts. Furthermore, given the considerable impacts of not only drought, but also flood hazards to local agriculture (Israel & Briones, 2012), the drought monitoring indices were replaced with a contemporary version and additional indices that could indicate potential flood-related crop damage were included.

Satellite images (SI) are invaluable sources of meteorological and environmental variables for countries characterized with complex topography, yet have a sparse network of land-based observation systems. Using SI, farm areas in the country that are considerably distant from PAGASA synoptic stations can now be provided with farm relevant weather and climate data. First of the SI-derived information used in this report is the rainfall estimates from the Global Precipitation Measurement (GPM) Level 3 data. Specifically, the Integrated Multi-satellitE Retrievals for GPM (IMERG) Late Run provided in daily timescale at ~10km horizontal grid spacing (GPM_3IMERGDL; Huffman, et.al., 2019), is used for rainfall estimates.

In earlier volumes of this report, assessments were formulated based on the prominent crop cycle over Bicol, and the Visayas Regions in the 1980s (Jose, 1982). Since the Assessment is prepared for all provinces and regions of the Philippines, this naturally led to some degree of uncertainty in the information provided for other areas of the country. This has been resolved in the current version of the report as the cropping calendar for rice and corn in the regions of the Philippines were based on recently published scientific papers. The prevailing cropping stages of rice and corn for a particular month is identified based on the findings of Gerpacio et al. (2004) and Gutierrez et al. (2019).

Crop water requirement varies in each stage of a crop. Here, the crop water requirement for corn is computed based on the stage-specific crop coefficient identified by Gonzales et al., (2019). For rice, the crop coefficients are based on the study of David (1983) and as recommended by the Philippine National Standards for Irrigation Water Requirement of lowland rice (PNS/BAFS/PAES, 2017). Accurate identification of rice and corn farm areas is also necessary to properly interpret spatial images, such as the NDVI. For this, the Assessment employed a masking process for rainfed rice and corn farms and irrigated rice farms in the Philippines for relevant spatial maps.

Along with precipitation, evapotranspiration is also a necessary factor to consider when determining the available moisture for crops in each of the growing months given that average atmospheric temperature in the Philippines has been steadily rising amid climate change (PAGASA, 2018). Following the Philippine National Standards (PNS/BAFS/PAES, 2017) recommended computation for crop water requirement (CWR), CWR is obtained as follows:


Currently, the potential evapotranspiration is obtained using the method described by Thornthwaite (1948) with the gridded monthly LST data as input. Crop coefficient is identified for each stage of rice and corn, as discussed in Auxiliary Data. The percolation value is provided by the Philippine National Standards (PNS/BAFS/PAES, 2017) for each soil type, which can be determined spatially for various areas in the Philippines using the Soil Type Vector Dataset of the Bureau of Soils and Water Management (downloadable from https://www.geoportal.gov.ph). Since both the input LST and output CWR are in a monthly timescale, the aforementioned equation has been modified accordingly.

The Rainfall Sufficiency (RS) at the provincial level is identified for each crop stages (prevailing crop stage at the grid point level) of both rice and corn using the computed CWR and the satellite-derived rainfall estimates as follows:


The resulting RS is used as an indicator to categorize accumulated monthly rainfall amount based on the following criteria:

The Standardized Precipitation Index (SPI; McKee et al., 1993) is a powerful drought monitoring index recognized by scientists from around the world and by the World Meteorological Organization (WMO, 2012). A variation of the SPI is the Standardized Precipitation-Evapotranspiration Index (SPEI; Vicente-Serrano et al., 2010), that takes into account the water balance condition, and thus, is useful for detecting agricultural drought events (Mie et al., 2021; Prabnakorn et al., 2016; K. Wang, 2021). The SPI User Guide (WMO, 2012) suggests the use of the 1-month SPEI and the 3-month SPEI for meteorological and agricultural drought monitoring, respectively. Here, we provide the gridded maps of both the 1- and 3-month SPEI to detect the possible occurrence of both the meteorological and agricultural drought conditions.

As mentioned earlier, heavy rainfall events can also affect the rice and corn crops. Hence, heavy rainfall events represented by the maximum 1-day (RX1day) and 5-day (RX5day) rainfall in a given month are included in the current version of the report. Both the RX1day and RX5day indices are part of the 27 Core Indices suggested by the Expert Team on Climate Change Detection and Indices (ETCCDI).

These indices are presented on spatial maps and careful interpretation of the results are discussed for each of the provinces comprising the regions of the country. An overall picture of the assessment covering the entire country is also provided.

Furthermore, notable amount of monthly rainfall received could have caused adverse impacts on both rice and corn crops mostly in the Caraga region and Palawan. This heavy rainfall amount was mainly attributed to the effects of the LPAs, Shear Line, and Tropical Storm Rosal (December 10-12, 2022). The NDVI indicates generally healthy vegetation throughout the country except for some areas in Nueva Vizcaya, Cagayan, and Isabela. In addition, both one-month and three months SPEI shows generally near normal conditions throughout the country, except in some areas that experienced slightly below average rainfall (i.e., SPEI1-Eastern part of Mindoro, SPEI3-portions of Nueva Ecija, Tarlac, Benguet, and Ifugao) and slightly wetter than normal rainfall conditions (i.e., SPEI1-Basilan and Isabela City, SPEI3-eastern part of Maguindanao, Basilan, and Sultan Kudarat). 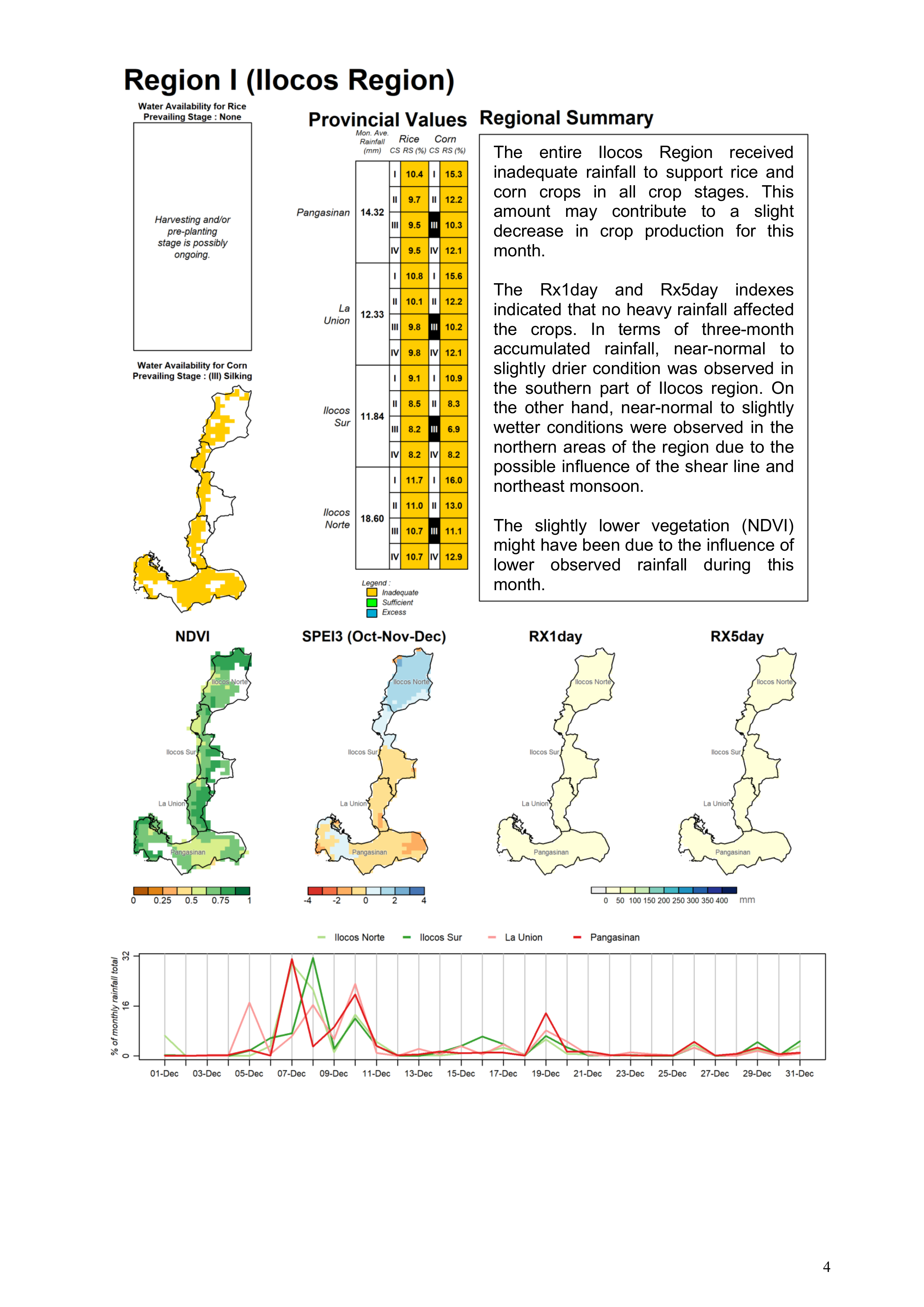 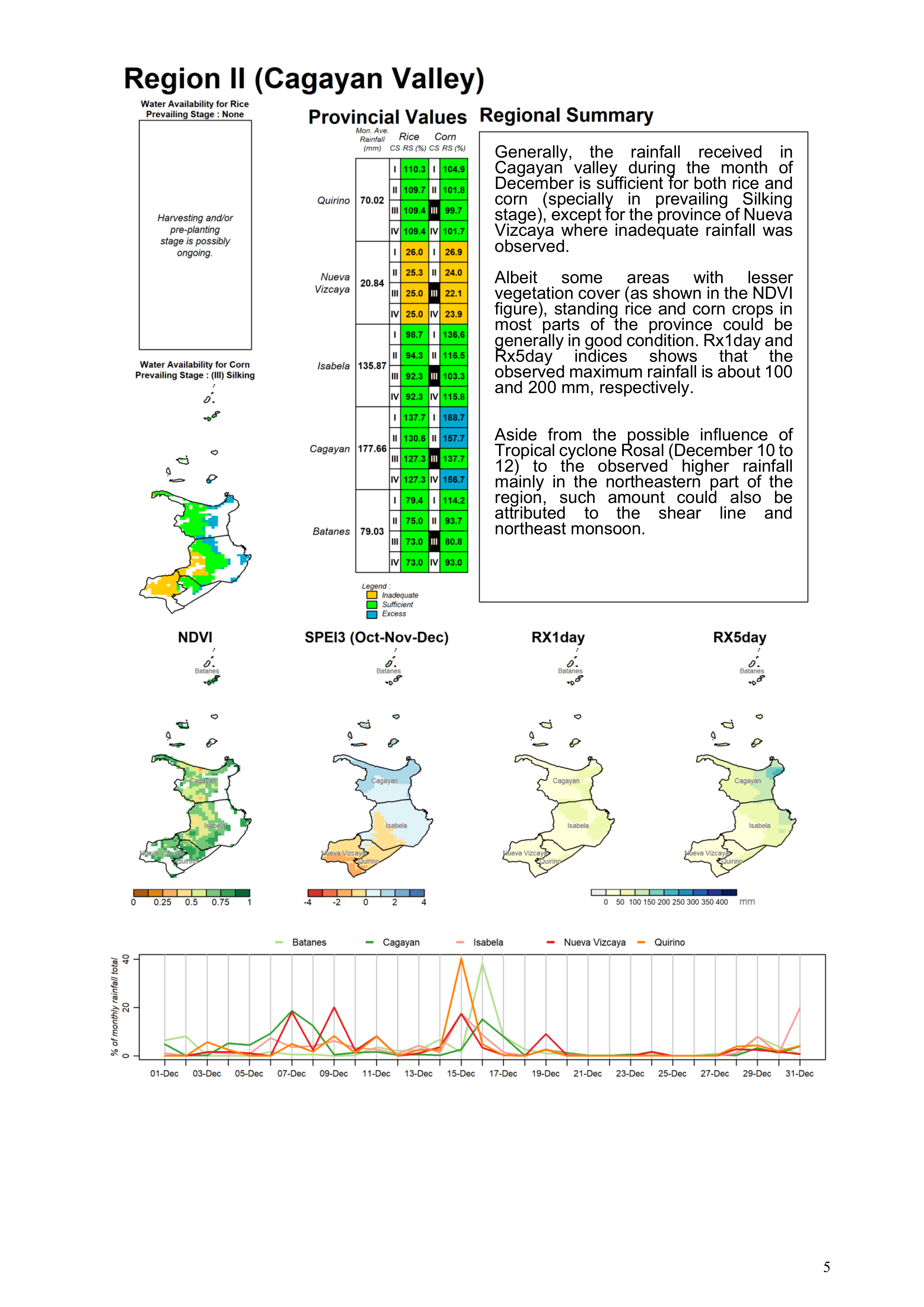 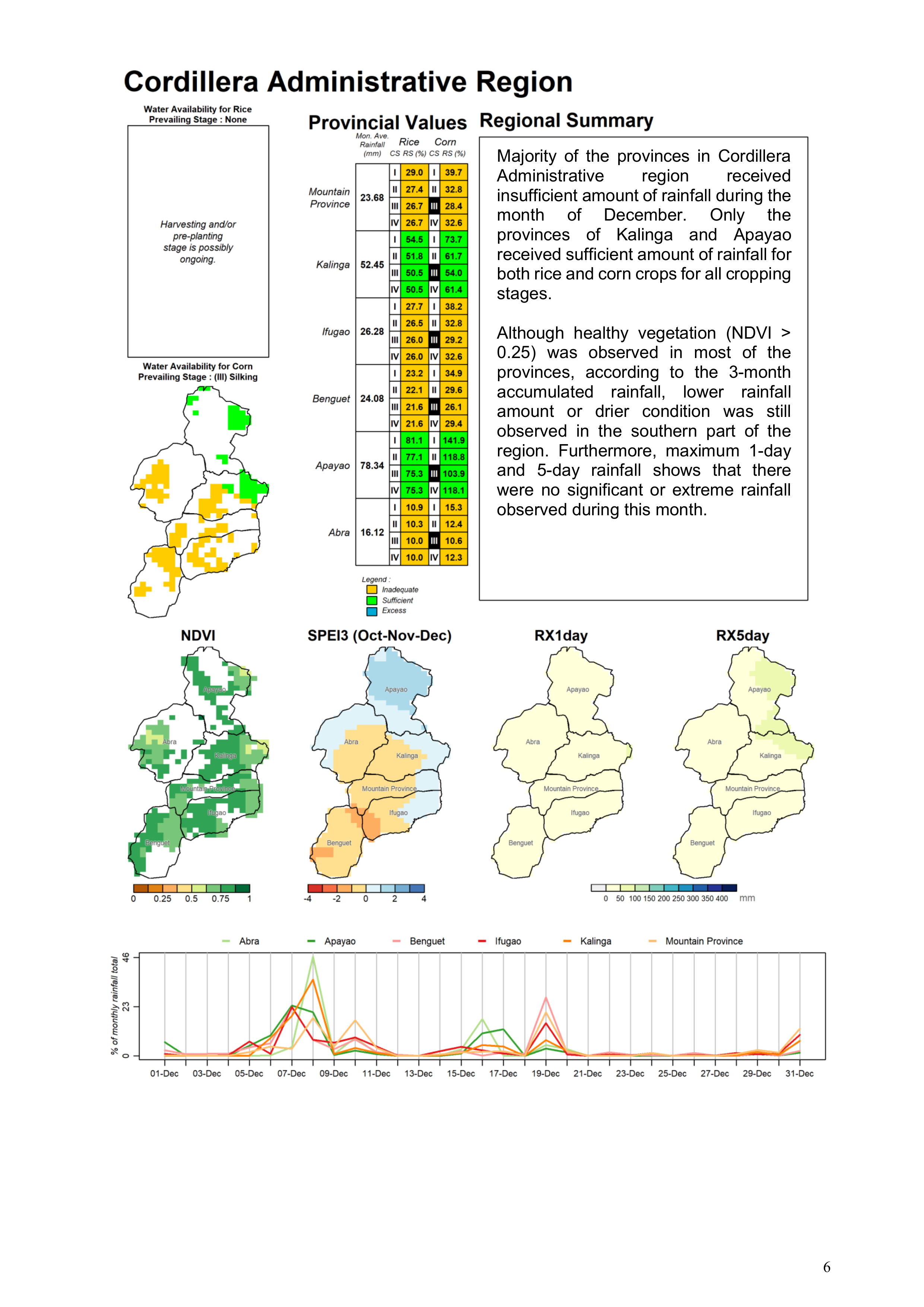 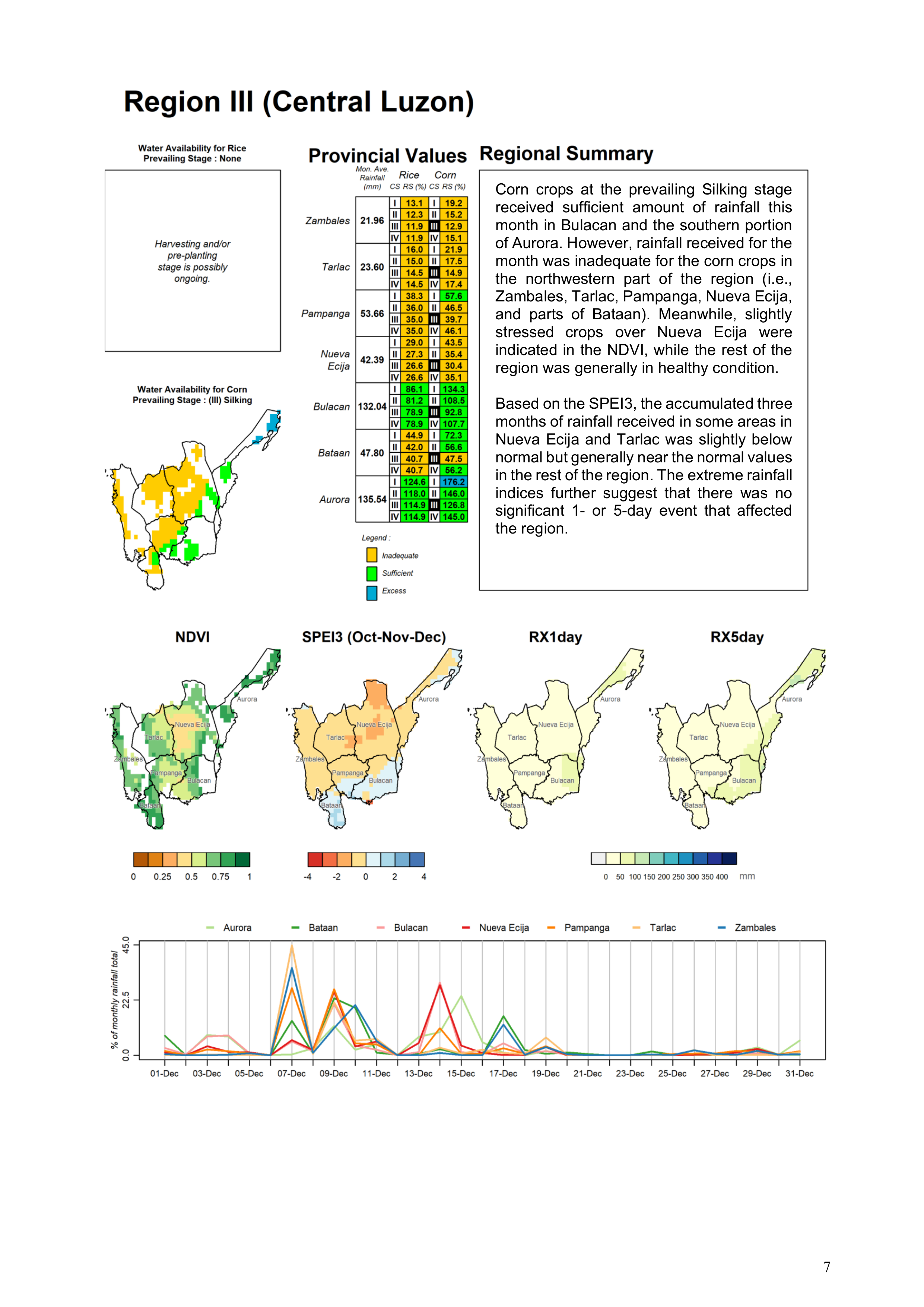 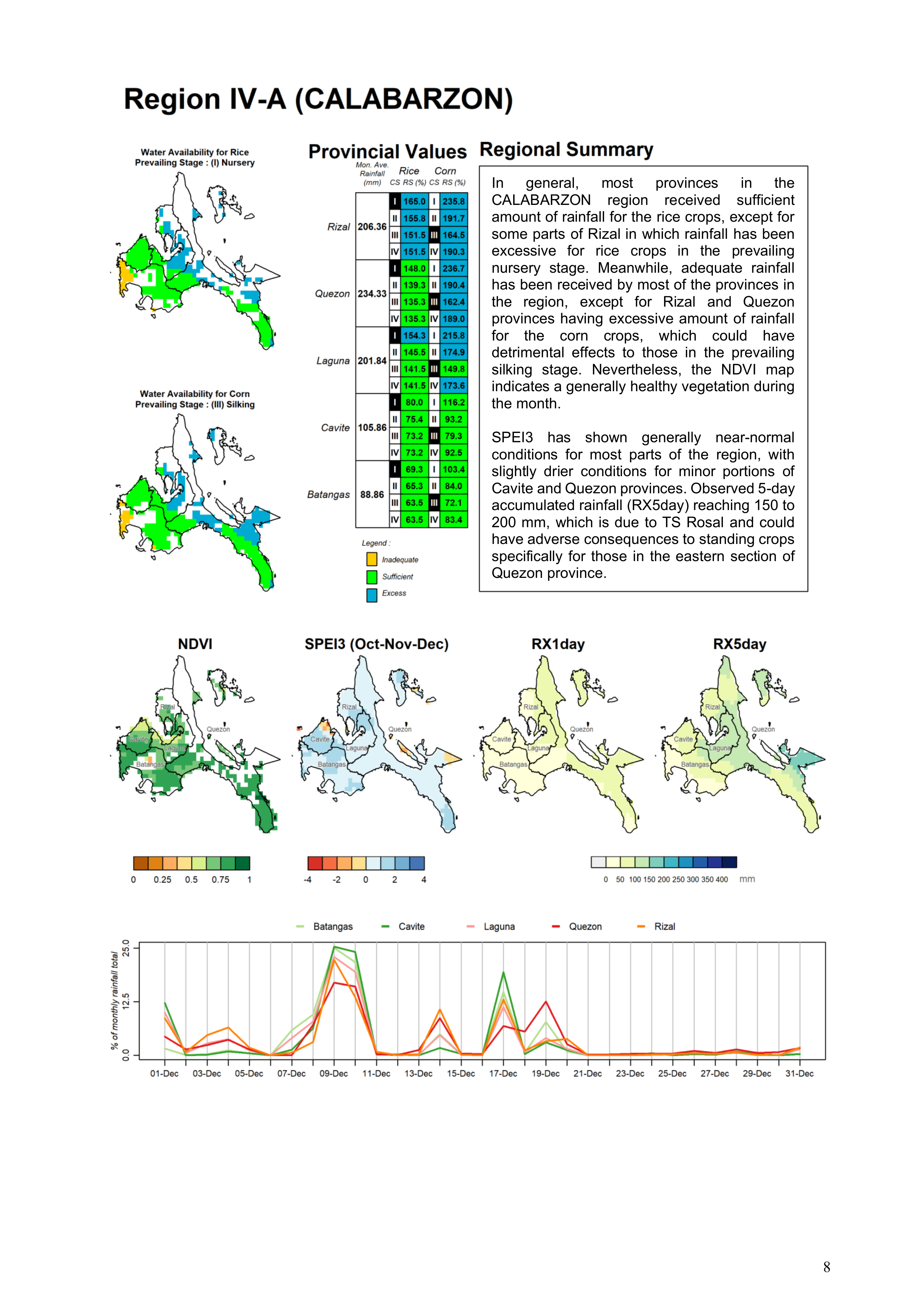 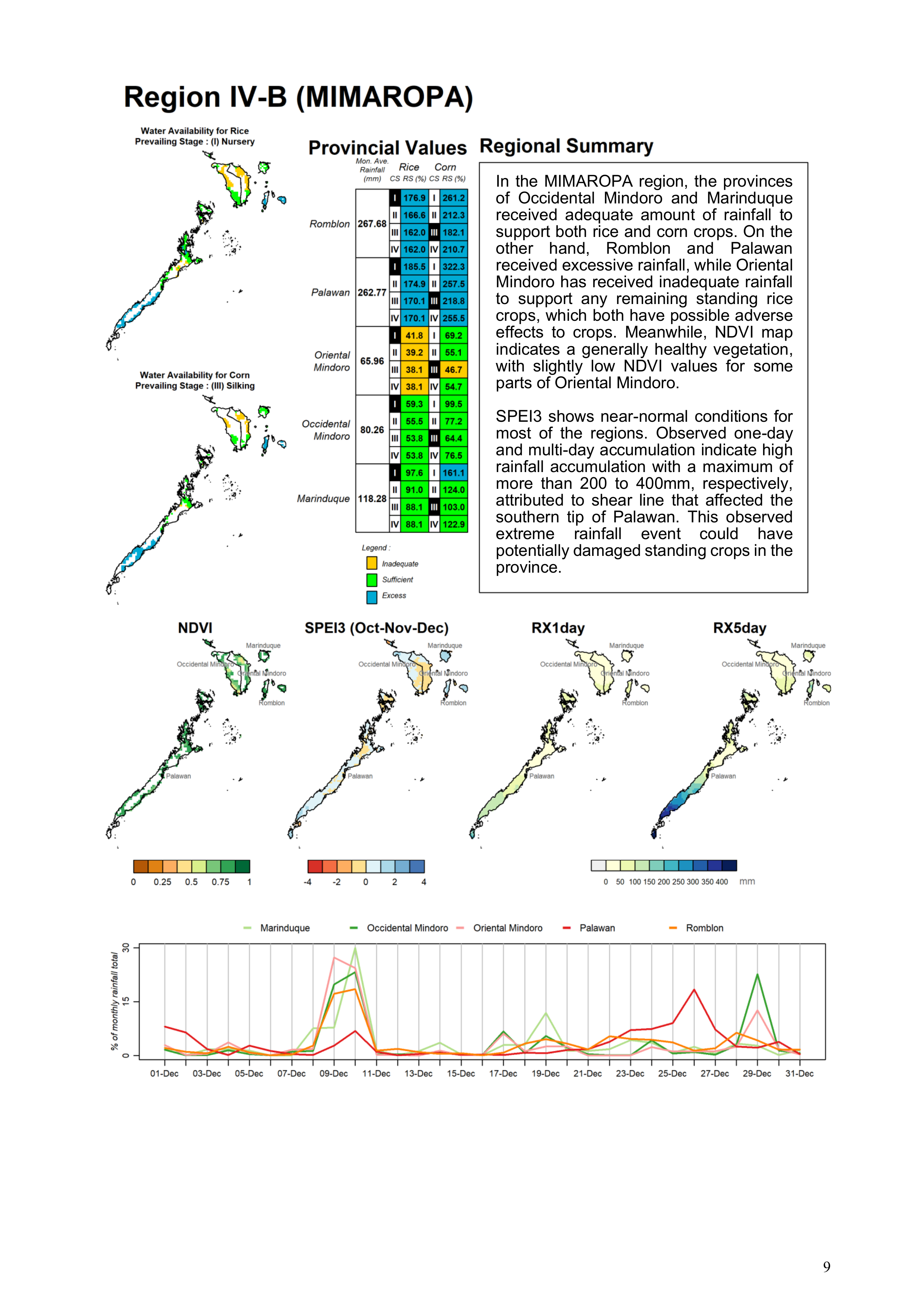 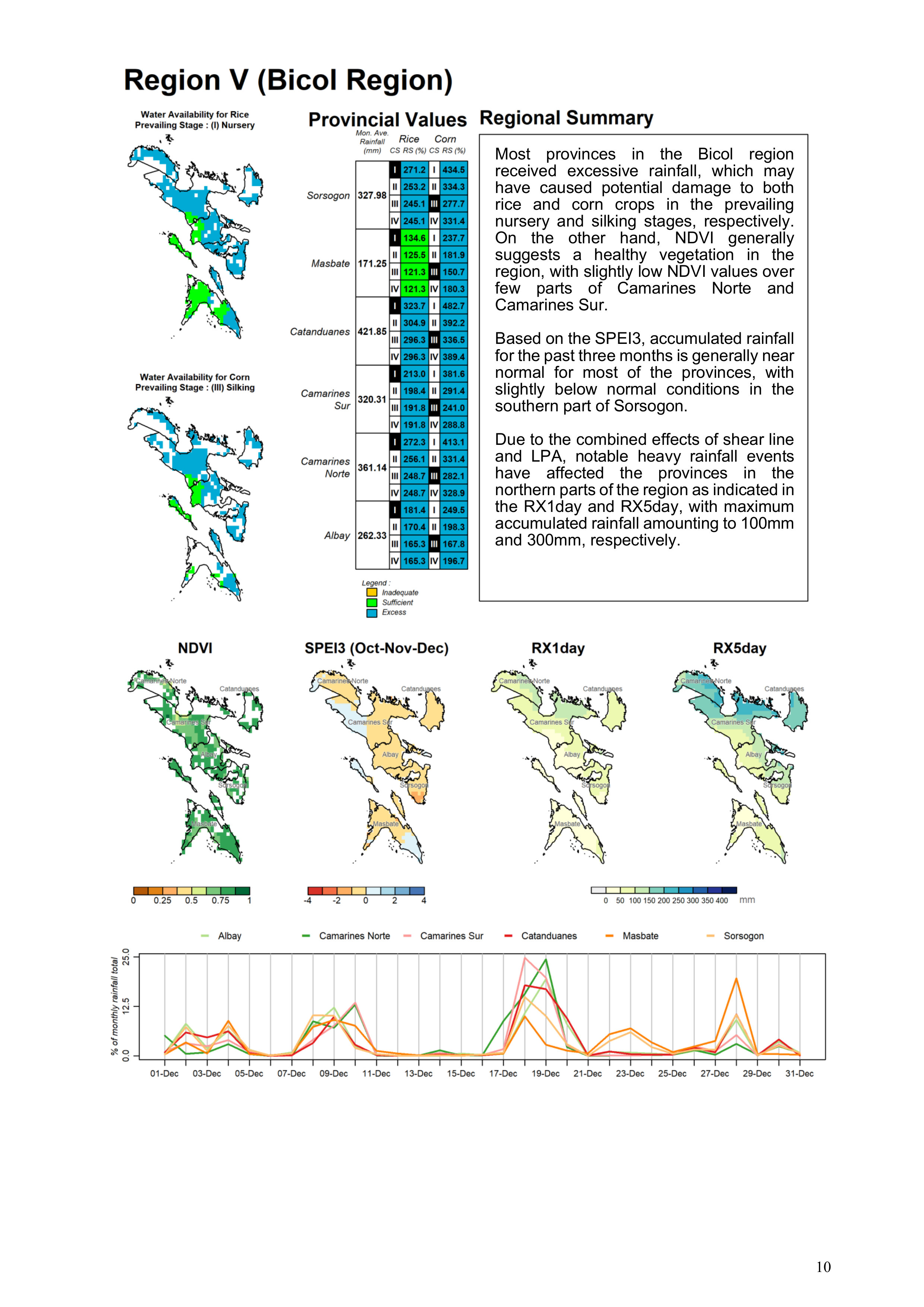 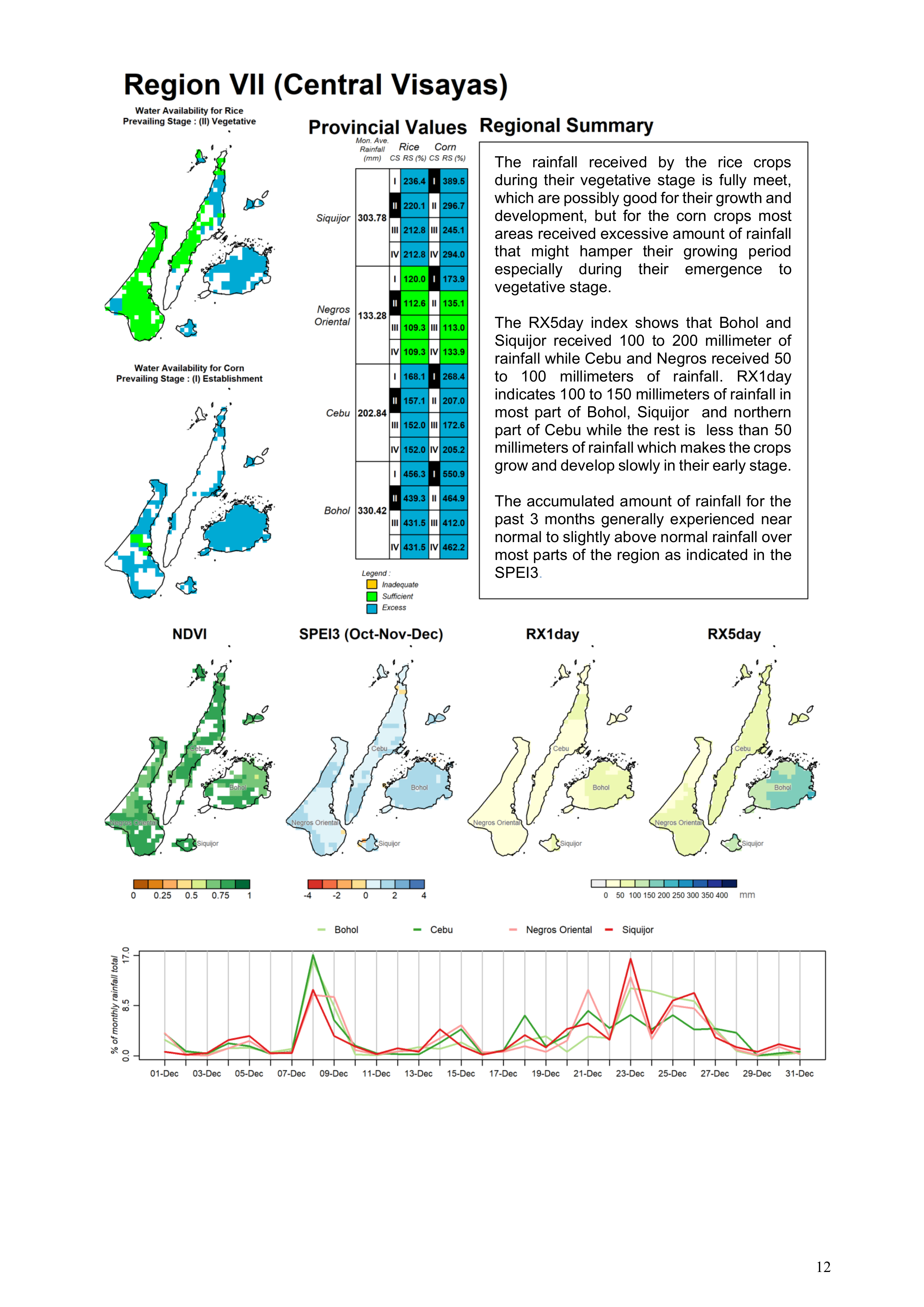 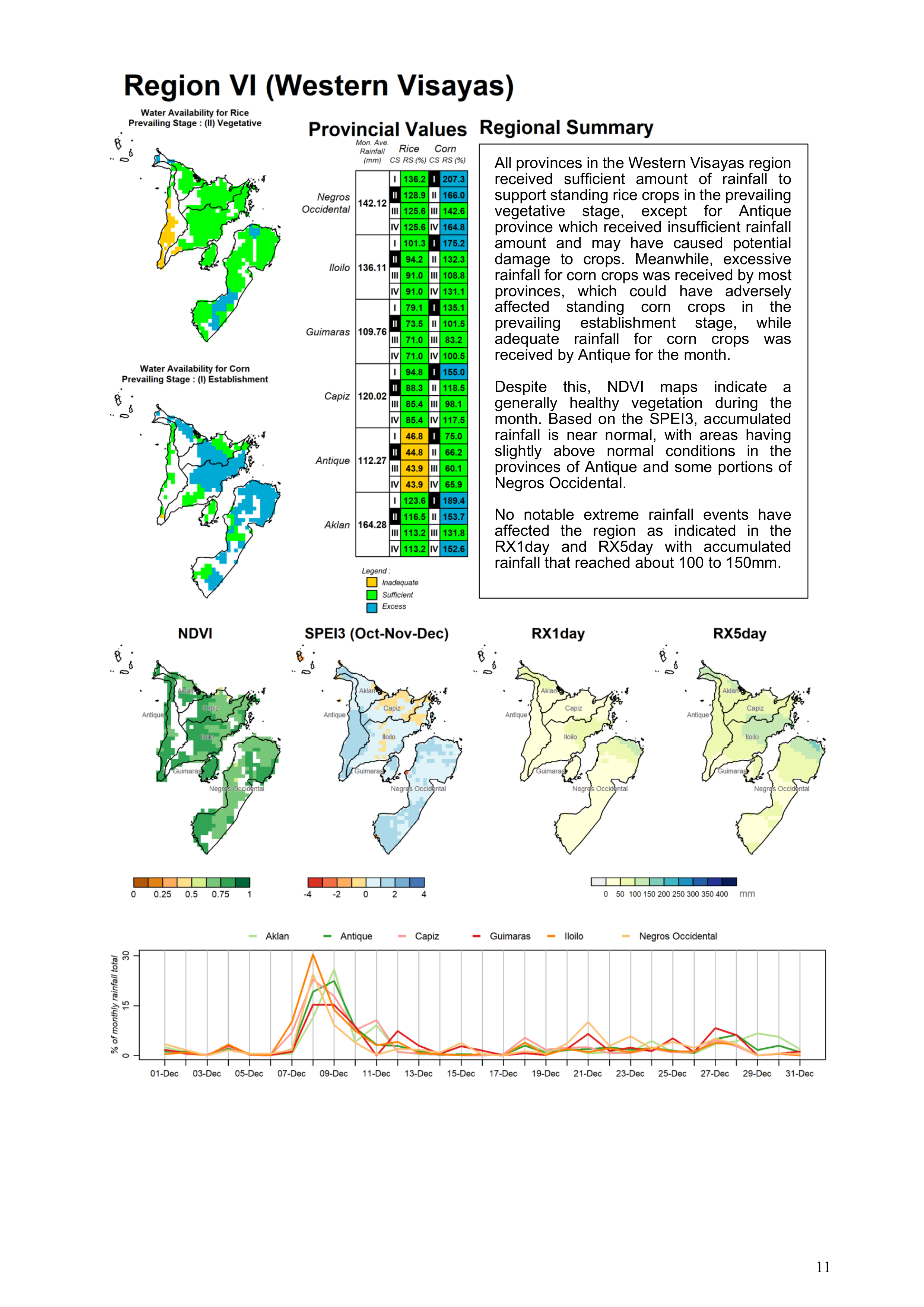 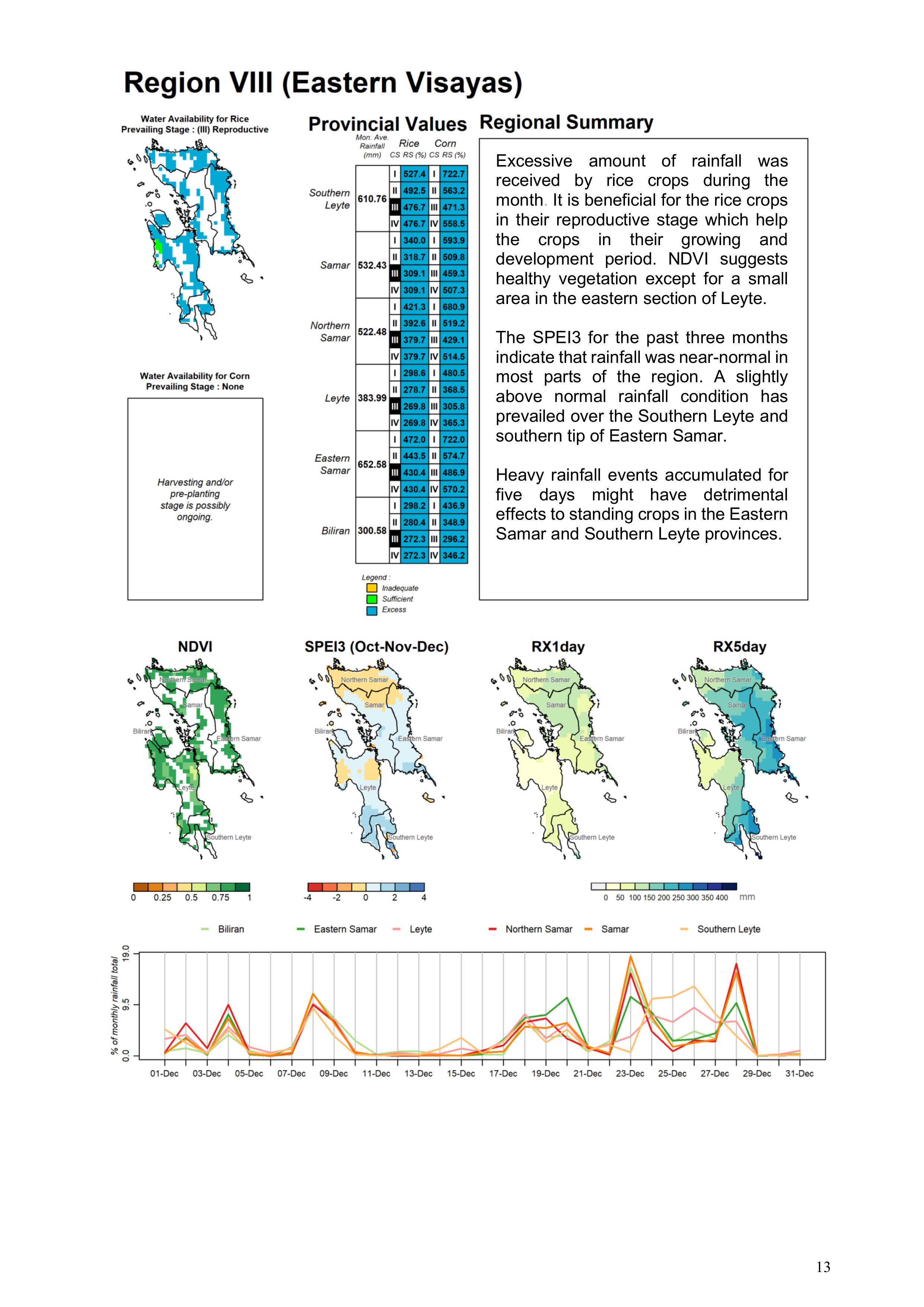 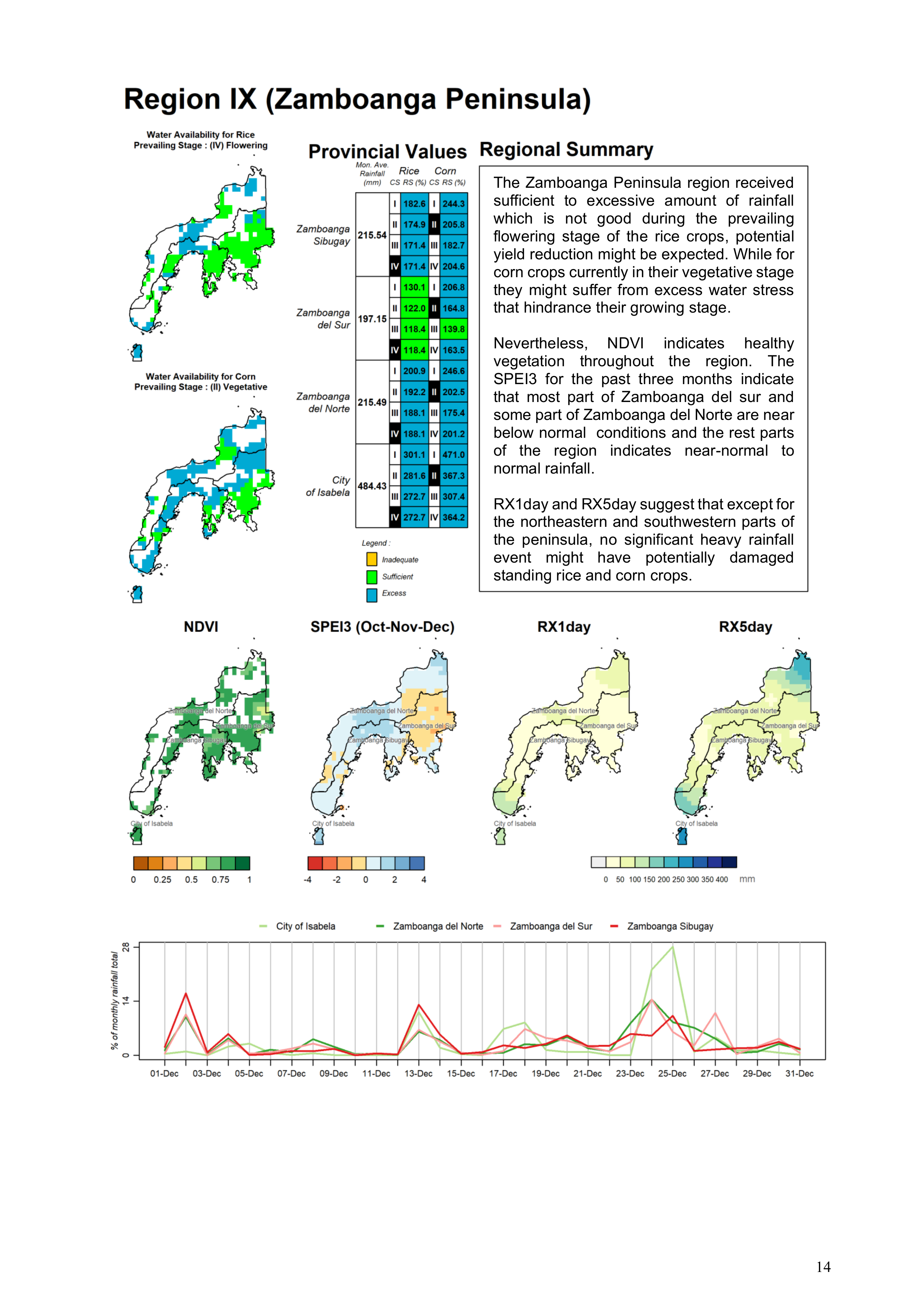 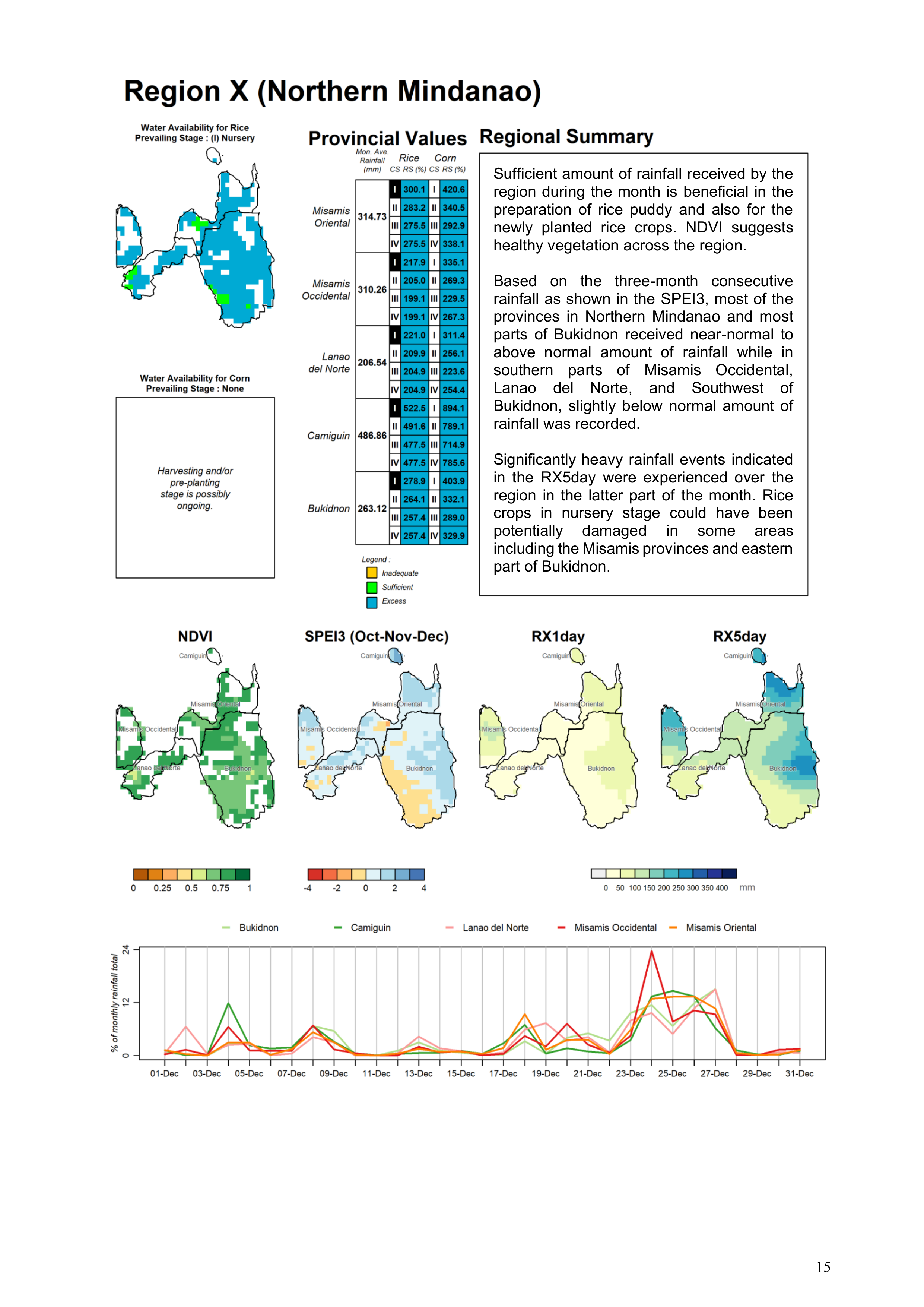 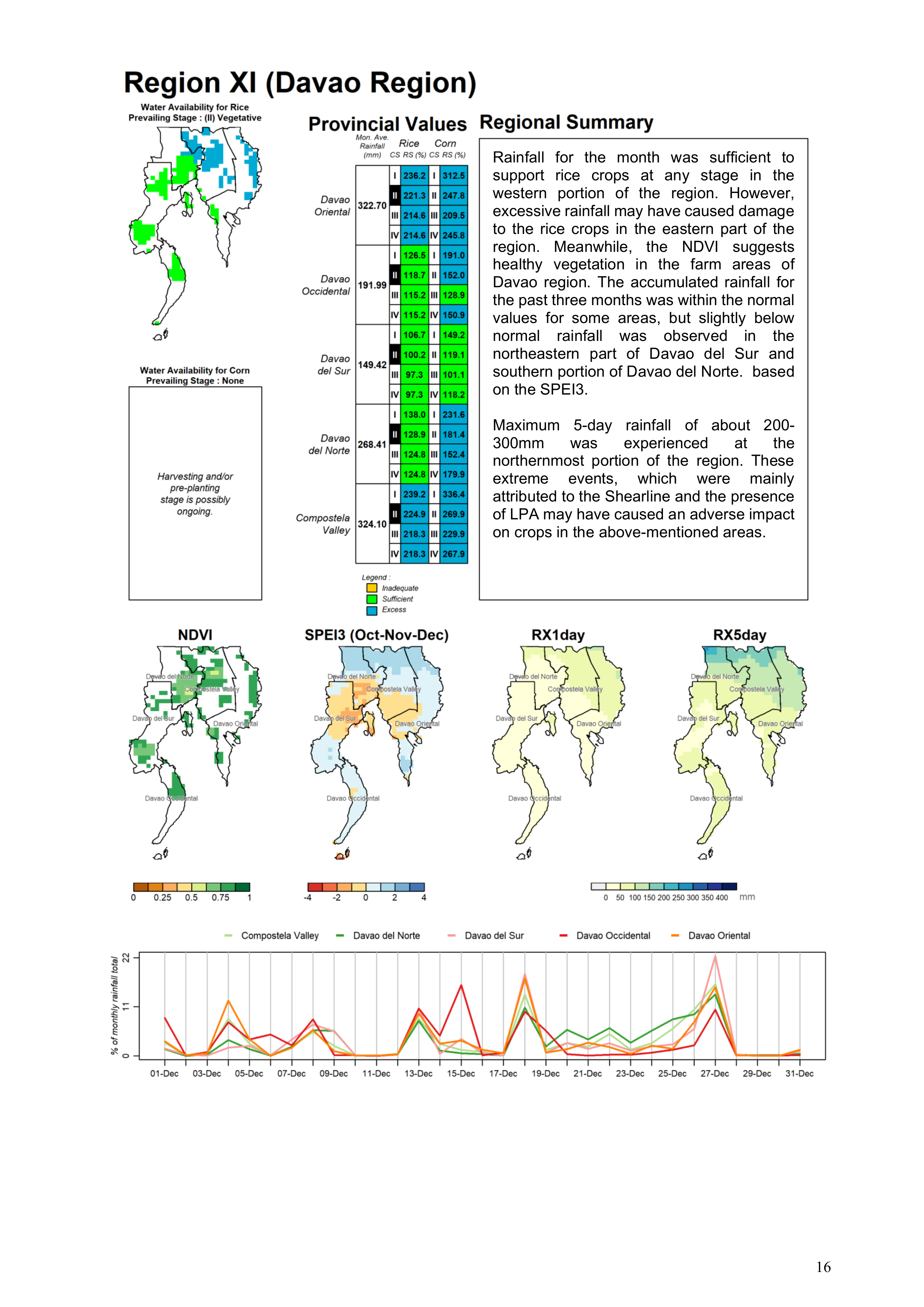 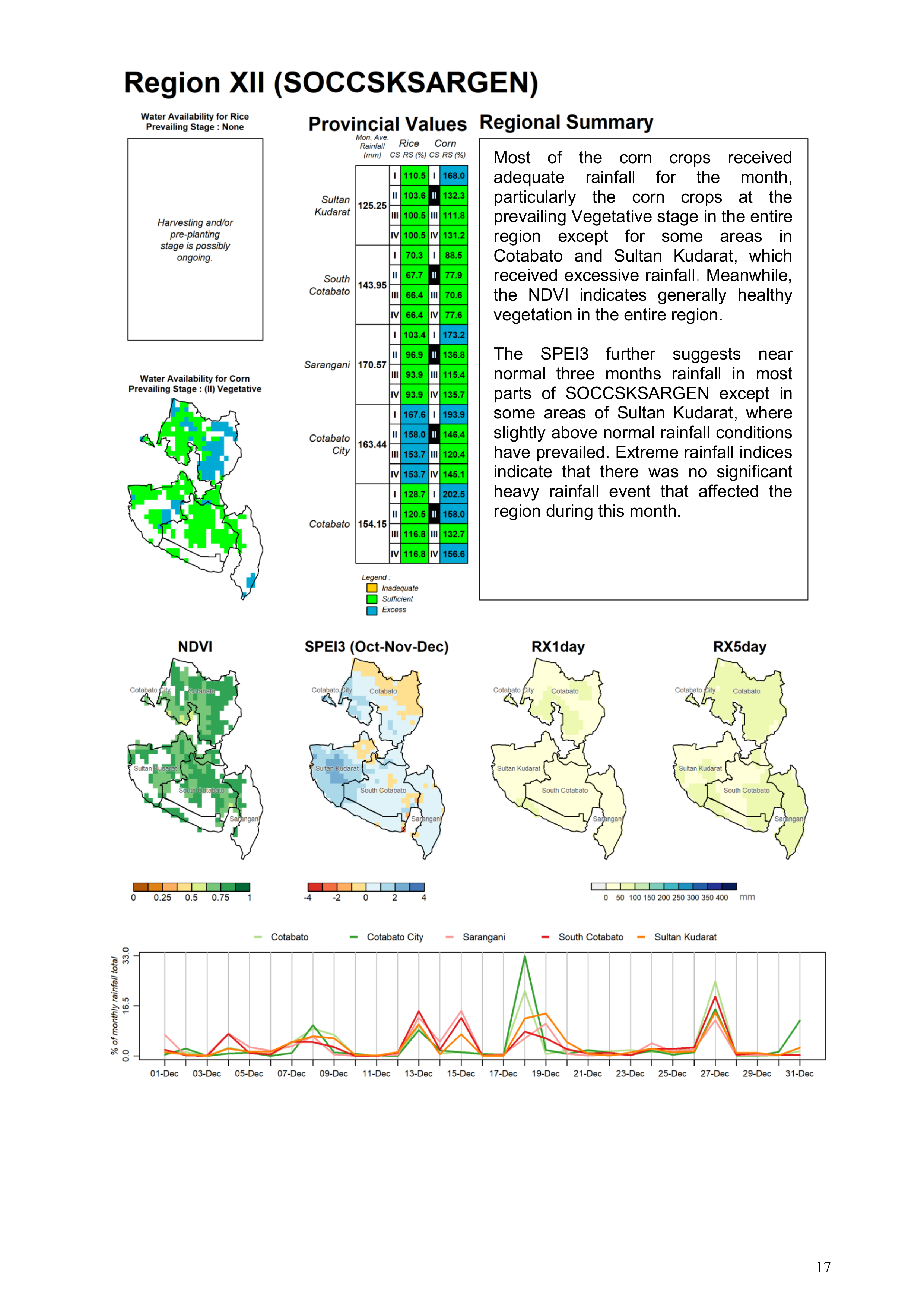 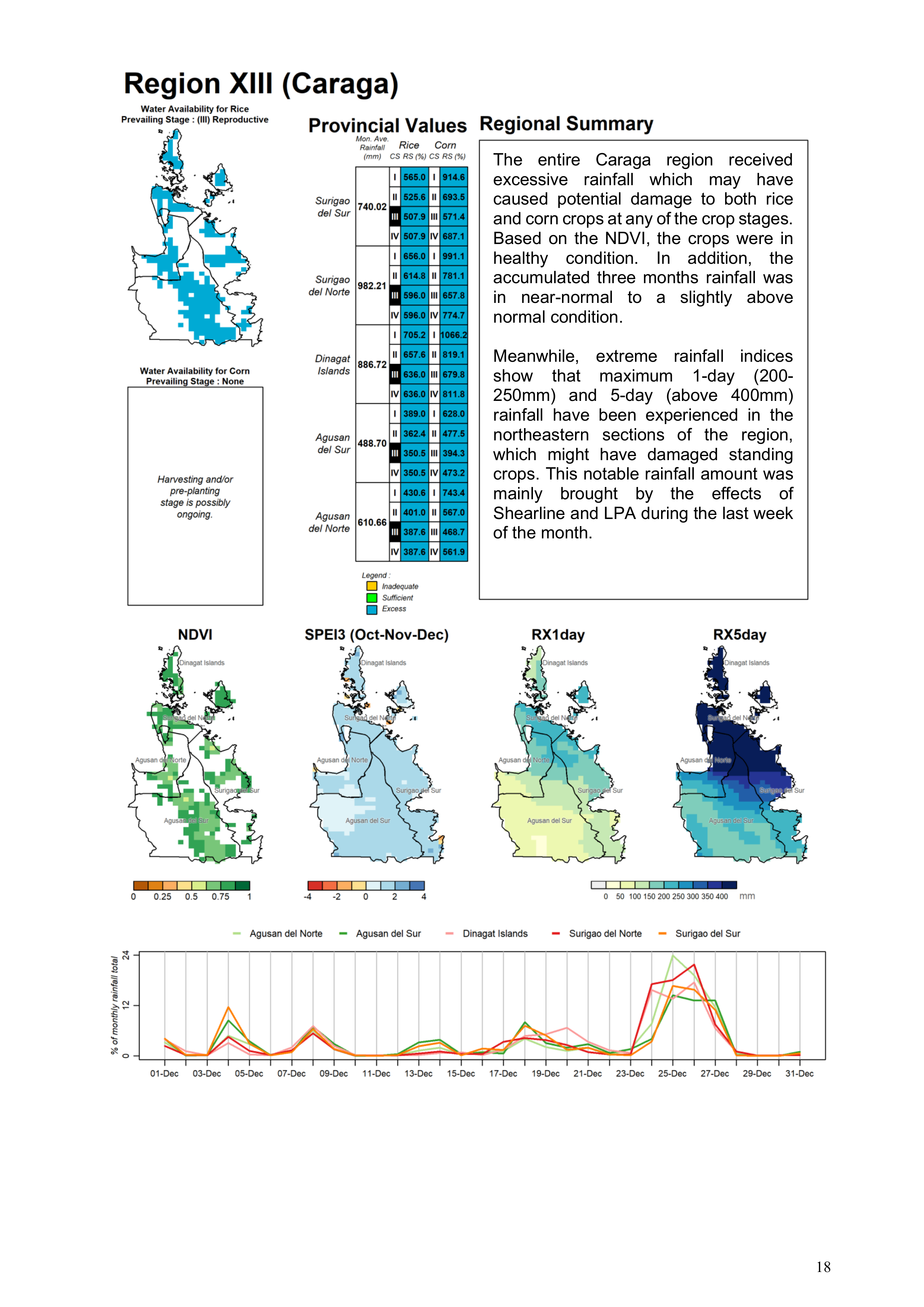 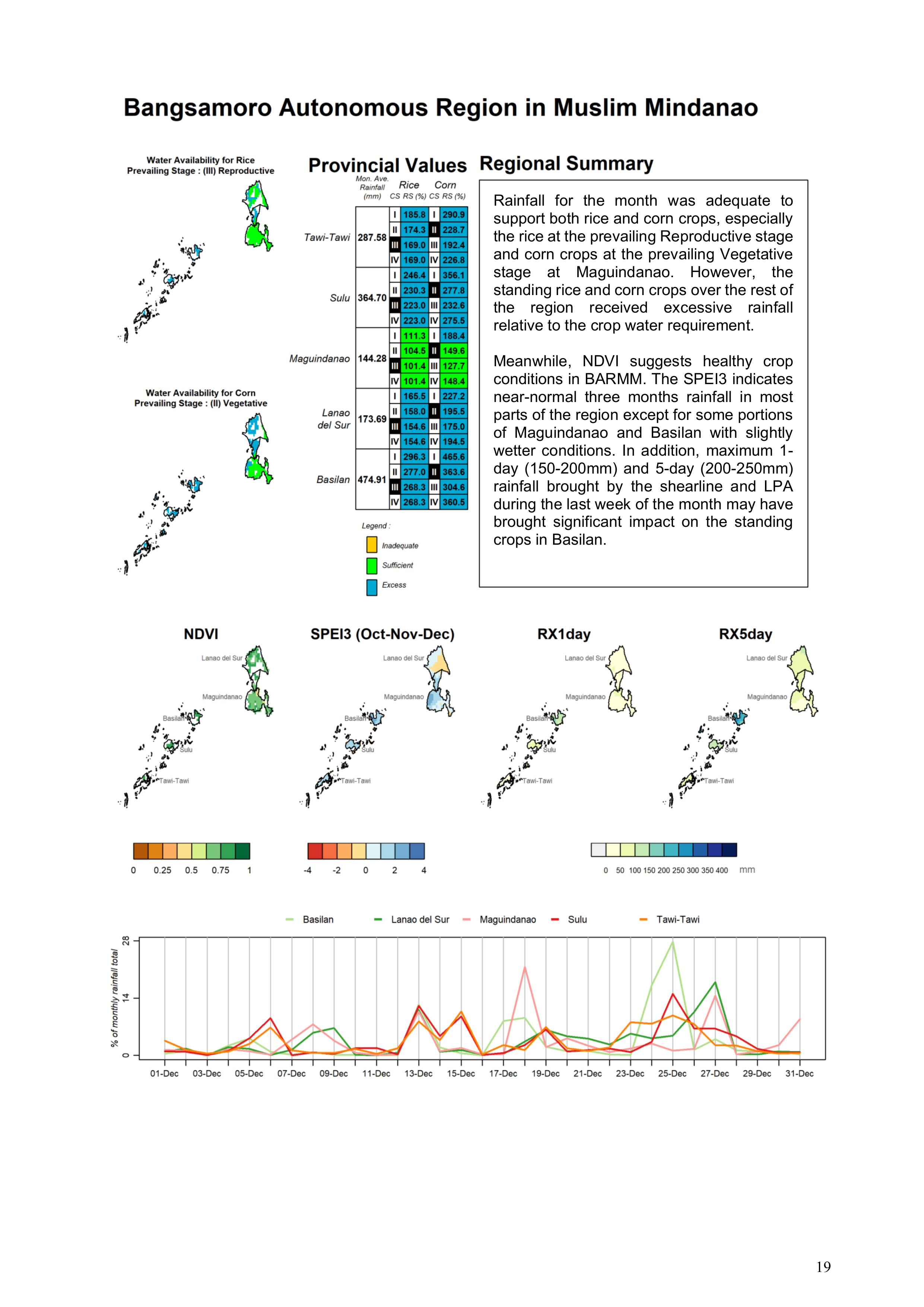 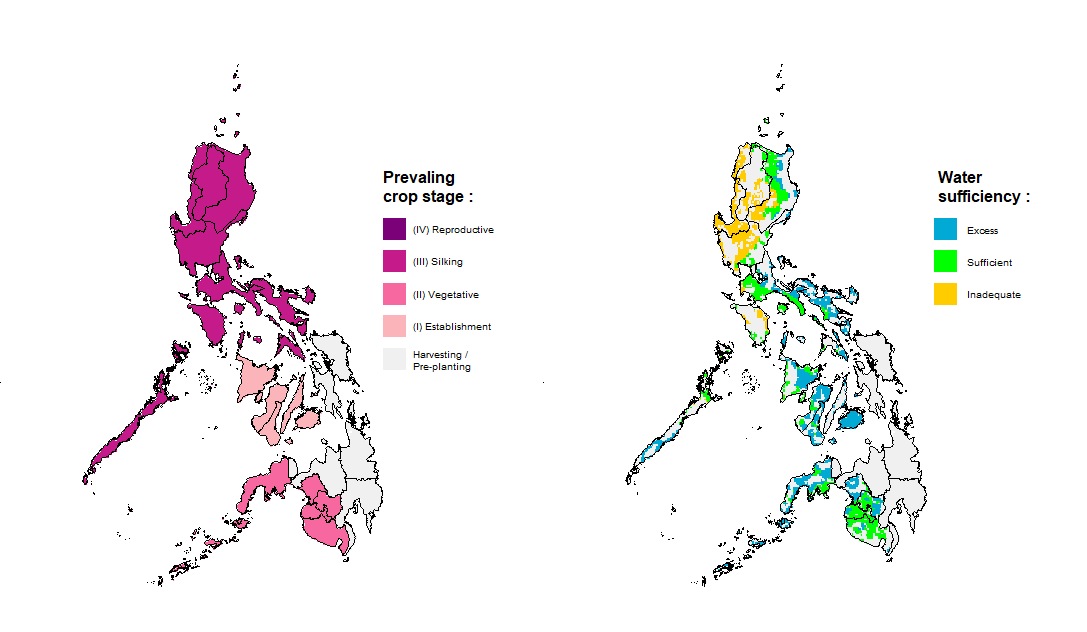 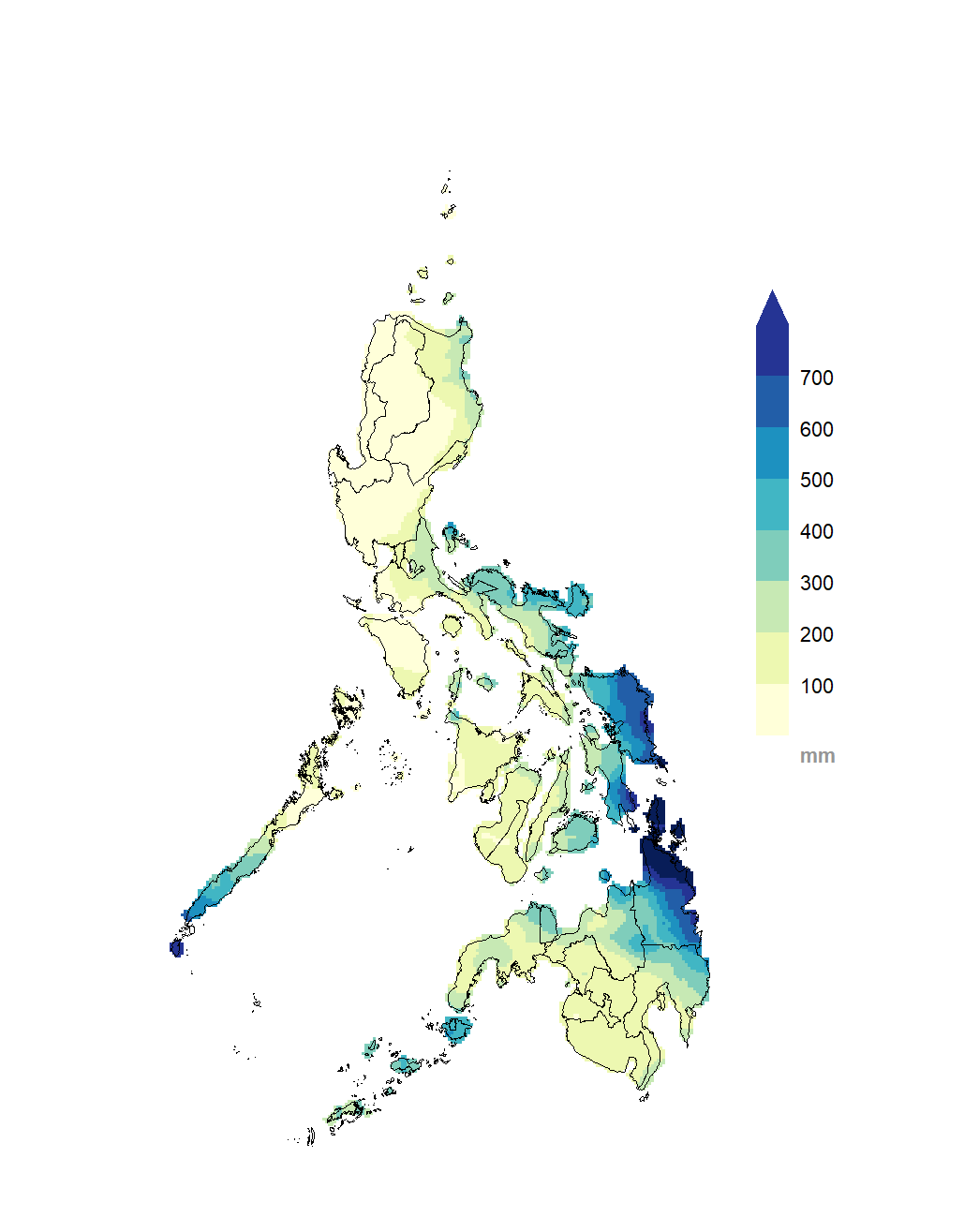 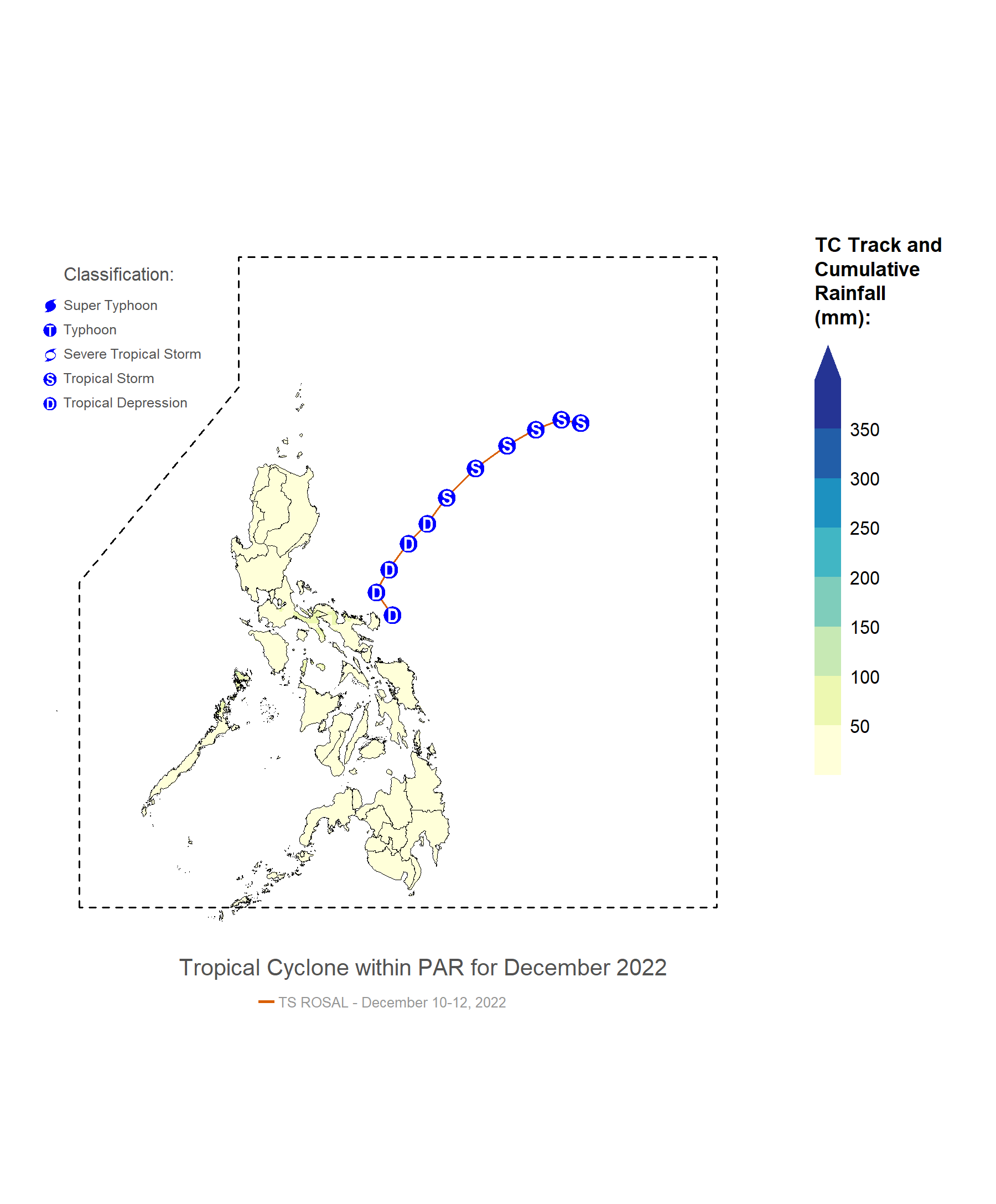 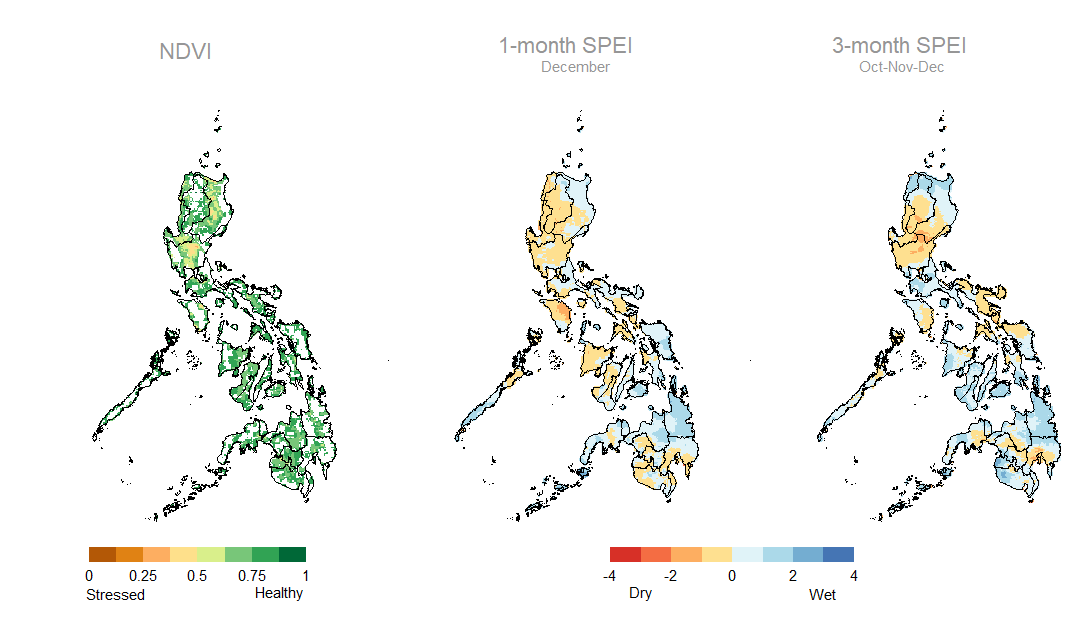