The Regional Severe Wind Hazard map represents the 3-second peak gust wind speed measured at 10-meter height (above ground) over open and flat terrain. This does not take into account the local factors such as topography, terrain roughness and shielding from neighboring structures. In order to generate the regional severe wind hazard, the Tropical Cyclone Risk Model (TCRM), developed by Geoscience Australia (GA) was used. The model uses statistical and parametric models to simulate the behavior of thousand years of cyclonic activities. Powell (2005) parametric wind field and Kepert (2001) boundary layer models were employed for each tropical cyclone.


Furthermore, the wind speeds from all events are fitted to the Generalized Extreme Value (GEV) distribution to determine an average recurrence interval or annual exceedence probability for a given wind speeds. The model output is combined with the analysis of the observed maximum wind speed (3-second peak gust) to adjust the various return periods (RPs) of maximum wind gust, which are determined using a Generalized Pareto Distribution (GPD). Historical tropical cyclone dataset from 1951 – 2017 archived of the Japan Meteorological Agency (JMA) were also utilized.


The regional severe wind hazard generated for the tropical cyclones that passed through the Philippine Area of Responsibility (PAR) are expressed in terms of return periods. These wind fields show the probability of any given magnitude that may occur in any given year. Various return periods were derived in the study such as 20, 50, 100, 200 and 500 year return periods (RPs). Simulated regional severe wind hazards were refined using the observation data of PAGASA stations (1951-2017) to accurately display sub-regional variations.


Figure 1 below shows the process in estimating the regional severe wind hazard levels. The historical tropical cyclone track dataset that entered the Philippine Area of Responsibility (PAR) from 1951 to 2017 was used to derive the wind hazard (Monteverde et al., 2017). Return period wind fields were computed by getting an average over a duration of time and extrapolated to calculate the probable distribution of wind speed across the country. The model generated the regional wind speed and utilized distribution of tropical cyclone properties (speed, bearing, and intensity) developed on a grid covering the PAR. 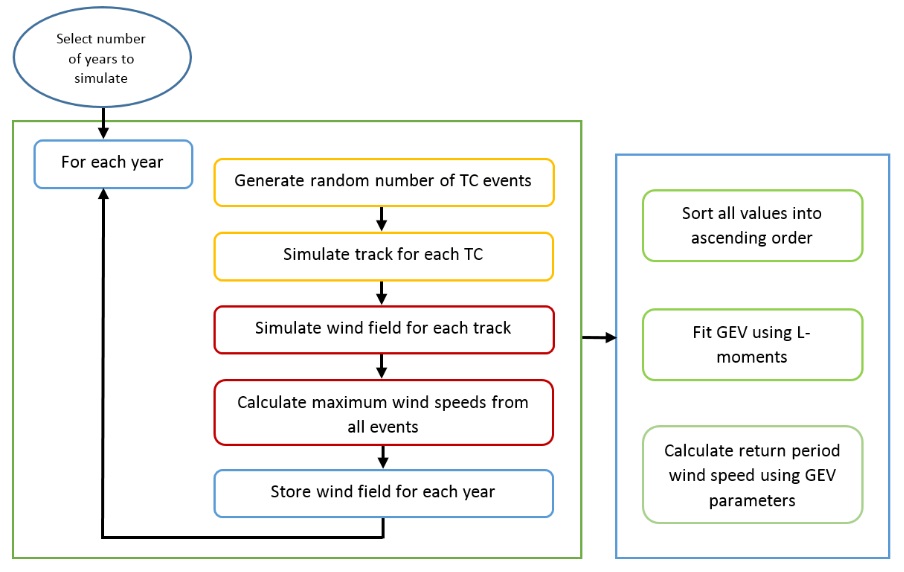